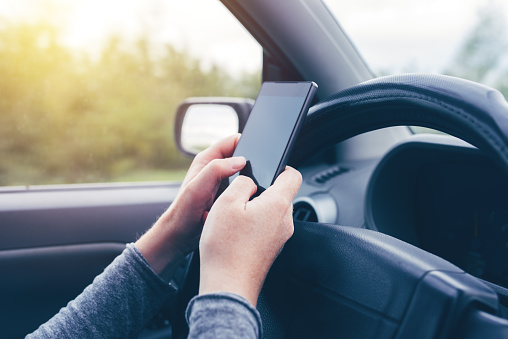 Watch out, if you notice another driver failing to stay between the lines while driving. There is a good chance he or she is distracted. Cellphones are the primary culprit behind distracted driving crashes. Cellphones aren't only used for making phone calls. They also allow users to text, browse the internet, post to social media, stream music, and program GPS navigation.

While it's perfectly fine to use these features, it's not OK to do so while driving. Some drivers know that it's dangerous, but may be willing to take the occasional risk just to read that important work email. Other drivers use cellphones habitually and don't think they'll ever be involved in a crash.

A recent study conducted by Boston tech startup TrueMotion Inc. reveals something rather alarming. All around us, at any given time, there is likely another driver using a cellphone behind the wheel.

TrueMotion monitored the driving habits of roughly 30,000 motorists who had downloaded the company's app in exchange for insurance incentives, according to Bloomberg.

The company based its findings on cellphone movements. Sensors can indicate if a driver has picked up a cellphone, made a call, sent a text, or kept the phone mounted.

Out of every 100 drivers, 30 were found to be distracted less than five percent of the time. Even for drivers who don't typically use cellphones behind the wheel, distraction could include briefly checking notifications, swiping, or switching through songs on a playlist. These actions can cause drivers to take their eyes off the road and hands off the wheel just long enough to cause a crash.

The study also found that at least one driver out of every 100 is distracted by a cellphone 45-50 percent of the time. Drivers who use cellphones more often while behind the wheel may be more likely to type and send texts, browse the internet, make and receive phone calls, and scroll through social media apps.

While many states have passed strict laws prohibiting all use of cellphones while driving, Kentucky, unfortunately, isn't one of them. Under the current law:

Drivers who are caught texting may face:

Sadly, the law doesn't always prevent distracted driving. Moreover, police officers may not be present everywhere. Those who text and drive may do so when they think they can get away with it.

That's why the Kentucky car accident attorneys at The Whaley Law Firm are dedicated to fighting for the rights of people injured in crashes caused by distracted drivers. We know that your crash wasn't your fault. We'll work tirelessly to help you recover all damages you're entitled to. To get started on your claim, contact us online and schedule your free consultation.