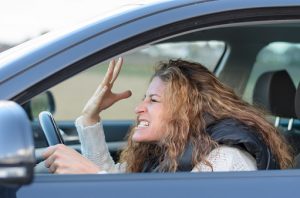 Would you consider yourself to be an aggressive driver? Your answer is probably no.

But speeding, driving too fast for conditions, failing to use turn signals, following too closely and cutting through residential neighborhoods are all common forms of aggressive driving, some of which you've probably committed at one point or another. The truth is that the majority of traffic collisions can be linked at least in part to some form of the behavior.

Aggressive driving is dangerous enough. But in many cases it can lead to expressions of road rage, including direct confrontations with other drivers.

Fox 17 in Nashville reported the Fourth of July weekend began with the arrest of a Kentucky man accused of shooting at a woman in a road rage incident. Police say the woman was on her way to work when another driver fired a 9mm round that shattered the window of her camper shell and lodged in the truck cab near where she was sitting.

The Drivers Ed report linked some form of driver aggression to more than 20,000 traffic fatalities a year, accounting for as many as two-thirds of all road deaths. The gray area between aggressive driving and road rage is when drivers begin to engage another driver directly, by shouting, gesturing or using the vehicle as a weapon.

Aggressive acceleration, slamming on the brakes, intentionally tailgating, or swerving toward another driver are all examples of aggressive driving.

Car accident lawyers in Louisville are always best consulted in the immediate aftermath of a serious traffic collision. Legal help becomes even more critical when driver aggression or road rage is involved. Collection and preservation of evidence and witness statements will be of paramount importance.

Aggressive driving is a serious safety issue. By resolving to not drive emotionally, you can significantly reduce your accident risks as well as the chances you will be found criminally or civilly liable for a traffic collision. As we reach the height of the summer travel season, allowing yourself extra time to reach your destination safely will help take the stress out of any road trip.

Most of AAA's safety tips are common sense, but we could all use the reminder:

Perhaps most importantly, do not engage with other drivers.

In the event that you've been injured in an accident caused by aggressive driving, contact an experienced attorney at The Whaley Law Firm.