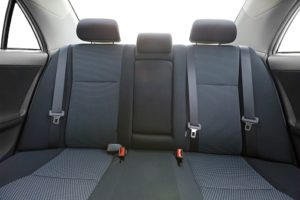 The back seat is no longer the safest place in a crash, and a recent study says progress is to blame, according to NBC News.

"It’s not that the rear seat has become less safe, it’s that the front seat has become safer over time," said David L. Harkey, president of the Insurance Institute for Highway Safety (IIHS).

A shift in safety priority

Seat belts, airbags that deploy in a crash and other improvements for front-seat car occupants mean that the back seat is no longer necessarily the safest place in a crash.

For decades, back seat passengers benefitted from the energy from a crash dissipating between the front seat and the back seat, the advantage of distance.

Technology has advanced for front-seat passengers. The more sophisticated seat belts tighten when sensors detect that a crash is imminent. Seat belts also can loosen if the occupant is pressing against the belt so hard that the belt itself might cause an injury.

Back seats in most cars lack sophisticated seat belt technology, researchers said. That means that the belts cannot loosen and that in a frontal crash, the belt itself can cause chest, abdominal or spinal injuries, according to a study by the IIHS and Children’s Hospital of Philadelphia.

Researchers in that study investigated frontal crashes that killed or seriously injured 117 rear-seat occupants between 6-92 years old. More than half of the back-seat occupants were more severely injured than front seat occupants in the same crash.

Still, back seat belts, even without the sophisticated technology of front seat belts, meet minimum federal safety standards. Automakers haven’t focused on the back seat because it was often unoccupied and upgrading the safety equipment in that part of cars would cost more.

Back seat safety could become a focus, however. Researchers say improvements are needed because the back seat is likely to be occupied more often, with an increase in passengers like older adults who have given up driving or users of ride-hailing services like Uber and Lyft.

Researchers seek ways to improve the back seat

While the safest place in a car is no longer the back seat, improving back seat safety is not as simple as installing in the rear the technology that has improved the front, according to The New York Times.

For example, regarding the improved front seat belts, loosening of the belts of back seat passengers could lead to the head moving too far forward and striking the back of the front seat, said Jingwen Hu, research associate professor at the University of Michigan’s Transportation Research Center who has studied back-seat safety.

Also, back seats lack airbags and installing the devices there is challenging because the front seats aren’t stationary.

Ford and some other automakers have installed rear seatbelts that build airbags into the webbing of the belt itself in several vehicle lines to offer protection similar to front-seat airbags, the NBC News story said.

By 2022, the Insurance Institute for Highway Safety hopes to have a back-seat crash test, allowing buyers to compare seat belt and other advances in technology for back seat safety in new models.

Contact the Whaley Law Firm today for help with crashes that injured back-seat passengers, as well as to seek help with other car crash and personal injury cases.