Understanding The Risks of Nighttime Driving: A Louisville Attorney Discusses 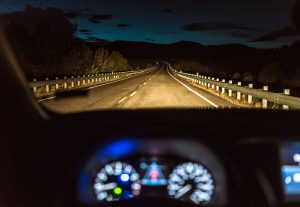 The shortest days of the year are here. What does this mean for Kentucky drivers? More nighttime driving, at least until the spring daylight savings. Nighttime driving brings its own set of risks. And those risks often increase the likelihood of being injured in an auto accident.

According to the National Safety Council (NSC), visibility is significantly reduced during nighttime hours. With normal headlights, drivers only have an average visibility range of 250 feet. When they turn on their high-beams, that range doubles to 500 feet. Nighttime driving is particularly problematic for senior drivers due to diminished eyesight.

Some drivers may be apt to use their high beams, especially on rural roads. However, if they aren’t used with care, they can be a contributing factor in an auto accident.

A shorter range of visibility means less reaction time to prevent a crash. When peak darkness is combined with environmental factors such as fog, rain and snow, drivers are faced with an even greater risk.

Lack of visibility, especially on roads not equipped with street lights, can be contributing factors in head-on collisions, rear-end accidents and rollover accidents.

Prolonged nighttime hours have a way of tricking our circadian rhythms (the body’s natural clock) into being programmed for sleep. When we are exposed to less light, the naturally occurring sleep hormone melatonin is released.

This increases the risk of falling asleep at the wheel. Typically, auto accidents caused by drowsy driving occur between midnight and 6 a.m., according to the National Highway Traffic Safety Administration (NHTSA). Such accidents often occur on rural roads and involve crashes at full speed. Approximately 795 people nationwide lost their lives due to drowsy driving accidents in 2017.

Injured in a crash? Speak to an attorney today!

Drivers in greater Louisville are expected to practice safe driving habits when navigating our roadways at night. However, some drivers exceed the speed limit, drive distracted, drive impaired, drive recklessly and show absolutely no regard for other road users. When their actions result in someone getting injured, they should be held accountable.

That’s where the experienced legal team at Whaley Law Firm comes in. We’re dedicated to helping injured motorists maximize their compensation. It’s not just about the money for us. It’s about sending a clear message to drivers who engage in dangerous behavior and put others at risk. Contact us today to schedule a free consultation.