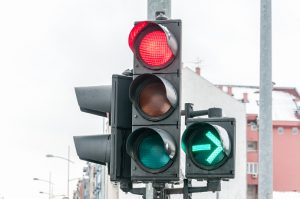 Intersections are some of the most dangerous places in greater Louisville.

The National Safety Council recently reported the U.S. had its largest two-year increase in traffic deaths in more than 50 years. And many of those crashes occurred at intersections.

The problem is clear. So are the solutions. But getting people to make such changes can be hard. That's why our car accident attorneys want to help.

Many different types of accidents often occur at intersections. Common crashes include rear-end accidents and collisions involving pedestrians and bicyclists.

Intersection accidents happen for many different reasons. Some of the most common causes and hidden dangers include:

Perhaps the greatest danger people face at intersections involves distracted driving. Drivers texting or talking on cell phones often put everyone on the road in danger.

How to make intersections safer

So what can drivers do to make intersections safer? What can they do to avoid causing a serious crash? Intersection safety often simply involves making common sense choices:

Liability for Intersection Collisions in Louisville

The majority of intersection accidents occur because drivers fail to yield, ignore traffic signals or drive too close. But these are not "accidents." They are the consequences of poor driving decisions. And drivers need to be held responsible for their actions.

Recovering from an intersection accident can be a long, slow process. In some cases, determining who caused your crash can be complicated. Police may even cite the wrong party.

That's why it's important to take action right away after an intersection accident. Take pictures and videos of the accident scene. Get the names and contact information of any witnesses or parties involved. And talk to an attorney as soon as possible.

Take back control after your crash

Kentucky has a pure comparative fault insurance system. K.R.S. § 411.182 allocates damage awards by proportional fault. This means victims partially at fault can collect damages from other at-fault parties. That's why it's critical to identify all at-fault parties when pursuing a claim for damages.

Take back control after your intersection accident. Speak with an experienced auto accident attorney in Louisville. We can help you preserve evidence. We can seek financial compensation from at-fault parties. We can deal directly with insurance companies, including your own.

If you or a loved one was injured in an intersection accident in Kentucky, speak to an attorney at The Whaley Law Firm today. We can help you every step of the way.