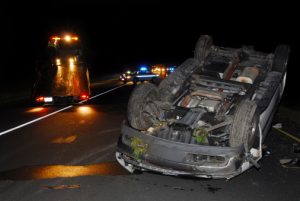 A pedestrian was struck and killed recently in a late-night accident in Louisville, KY. WLKY reported that the incident occurred on a Thursday morning at around 12:15 AM at Main Street and Clay Street in the downtown Louisville area. Police were called to the scene of the collision and found a man lying in the road who had been run over by a Toyota Camry.

The driver of the Toyota stayed at the scene of the accident and spoke to police. The victim was taken to University Hospital where he was subsequently pronounced dead later in the evening. Police indicated they were conducting an investigation into how the incident happened. No charges were expected to be brought.

Unfortunately, this fatal accident is one of many deadly pedestrian accidents which will occur in Kentucky over the course of the year. Many pedestrians fatalities happen in the nighttime hours, and drivers and walkers both need to be aware of the added risk when out after dark.

Louisville has a high rate of pedestrian accident fatalities, with Courier Journal calling Louisville streets a "pedestrian danger zone."  Accidents can occur any time when walkers or drivers fail to obey the rules of the road or exercise reasonable care. Nighttime, however, can be especially dangerous because:

While there will always be added dangers at nighttime, if drivers and walkers take extra steps to be safe and to avoid pedestrian accidents, the risk can be mitigated. It is every motorist and walker's responsibility to understand and respond to the dangers on Louisville roads.