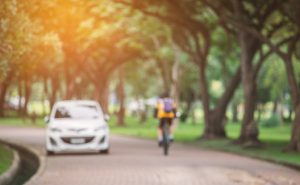 A 3-foot bicycle passing law took effect in Kentucky on July 14. The Morehead News reports 34 other states have already passed similar laws, which are aimed at reducing and preventing bicycle accidents. Kentucky law now requires motorists to move into a left lane if possible and to leave a minimum of 3 feet between their vehicle (including side mirrors) when passing a rider.

Serious and fatal Kentucky bicycle accidents have increased by 50 percent in recent years, according to the Kentucky Department of Transportation. About 10 riders are killed per year on Kentucky roads and many more are seriously injured. The rates continue to increase with the popularity of cycling for fitness.

Just recently, ABC Channel 11 reported that a cyclist was killed on Fern Valley Road. Authorities believe the 61-year-old cyclist was struck in the rear by an approaching motorist.

The new law also allows motorists to legally cross a double yellow line to pass a cyclist when there is enough sight distance to make it safe to do so. Conversely, the law does not prohibit motorists from passing a cyclist and violating the 3-foot rule when roadway width makes 3-foot clearance impossible.

Laws related to bicycles are in Kentucky Administrative Regulations, KAR 14:020.

Most riders understand the risks and ride responsibly. Collisions commonly occur when a motorist fails to yield the right of way by either turning left in front of an oncoming rider, or passing a rider and then pinching off the cyclist's route by making a right-hand turn.

While you can make a claim against an at-fault driver and his or her insurance carrier, our Louisville bicycle accident attorneys continue to see an increasing number of these cases involving hit-and-run drivers. Unfortunately, hit-and-run accidents are particularly common when the victim is a cyclist, and the injuries sustained are often severe. If you ride a bicycle but also own a car and thus have car insurance, we recommend carrying uninsured motorist (UM)/underinsured motorist (UIM) coverage. This is valuable coverage for anyone, but is particularly important for cyclists because the injuries sustained in bicycle accidents are often severe and may exceed the minimum liability coverage.

If you've been injured in a bicycle accident, it's crucial that you seek legal representation. Contact The Whaley Law Firm for a free consultation.